Retirement Income Alert: Do You Own A $1 Million Plus IRA In A High Income-Tax State? 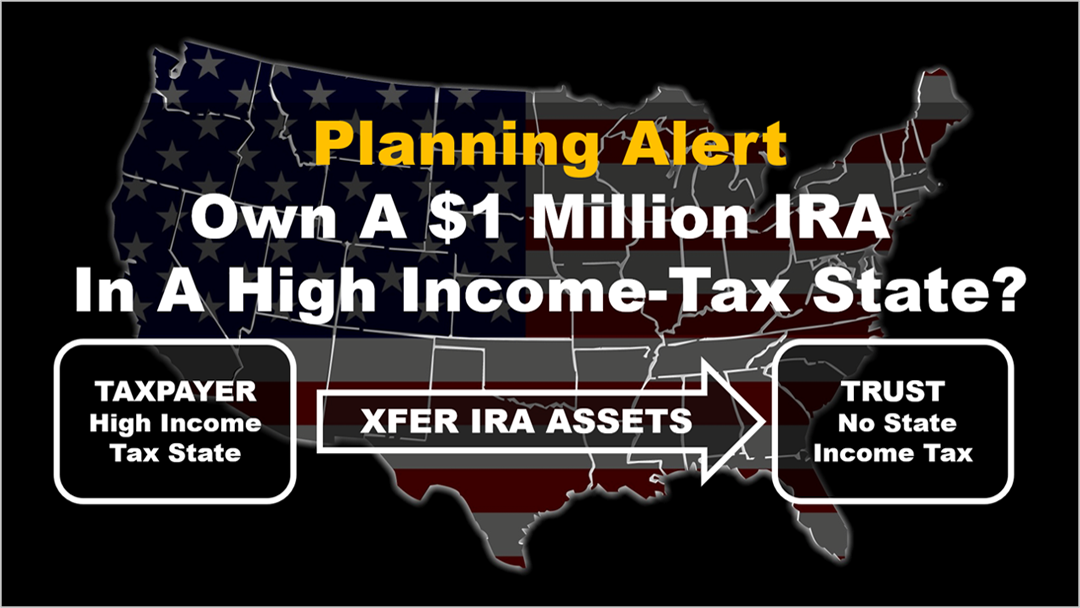 If you own a $1 million IRA account and live in a state with a high income-tax rate, here's a financial planning tip that could save you thousands annually on state income tax. The strategy requires setting up a trust in a state with no income tax, which is probably not something you do every day. So, here's a primer.

This is a new way to legally reduce your taxes and comply with current tax law, and a key principle driving the strategy recently was affirmed by a Supreme Court ruling. Basically, the non-grantor trust you would set up creates a new taxpayer in a state with no income tax. Then, the non-grantor trust distributes income. If you live in a state with an income tax, establishing the trust outside the reach of the state in which you live eliminates the state income tax you'd otherwise owe.

This strategy is particularly timely because of a looming reform to the federal tax law. The tax proposal, which is widely expected to be signed into law by the end of 2019, requires that distributions of income from IRAs you leave to non-spouse beneficiaries — your children and other loved ones — be distributed over 10 years. This would prevent your heirs from taking minimum annual distributions based on their life expectancy on inherited IRAs — a popular strategy known as a "Stretch IRA." By utilizing a trust to move the IRA distributions to a state with no income tax, your beneficiaries avoid state income tax on those required distributions of income on inherited IRAs.

Why does this advisory merit urgent attention of individuals with IRAs exceeding $1 million in high income tax states, even though the proposal may not be signed into law until the end of the year? The answer: Because both chambers of Congress and President Trump have expressed support for the reform.


This aspect of retirement income planning is fraught with complexity. New York and California recently enacted laws adversely affecting non-spouse beneficiaries residing in states with an income tax. Please contact us with questions about this topic, as this strategy requires personal advice from a qualified tax professional.